What Are the Environmental Benefits of Solar Energy?

Solar energy significantly reduces carbon dioxide emissions. It will substantially lower your carbon footprint. According to data from SolarCity, installing solar panels will reduce your CO2 emissions by 95% compared to getting your energy from fossil fuel power plants. 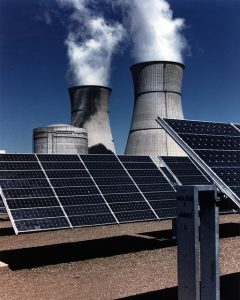 Countries of the world have made a commitment to reduce CO2 production by 80% by 2050. Installing solar panels around the world will gradually help us meet that target while reducing our dependence on fossil fuels.

Fossil Fuels Are a Finite Resource, While Solar Energy Is Not

Fossil fuels aren’t just terrible for the environment: they’re a finite resource. There’s only so much coal or oil in the world. Eventually, we’re going to reach a point where there are no more resources available.

Because fossil fuels are a finite resource, prices can be volatile. The limited availability of these resources creates a market that’s prone to ups and downs. We’ve seen the price of oil rise and fall sharply over the years, for example. Or, countries that have control of the majority of these finite resources can hold the rest of the world “hostage” by manipulating prices – like we’ve seen with the Organization of Petroleum Exporting Countries (OPEC) multiple times over the decades.

Solar energy is the complete opposite: solar energy is available around the world in every single country. It’s an infinite resource that is never going to run out (until the sun collapses on itself several billion years from now, of course). The energy from the sun is hitting the surface of our planet every day. Most of that energy is absorbed into the land and water. By capturing a tiny fraction of that energy, we can create enough electricity to power our entire world.

They’re Quiet and Non-Disruptive to the Environment

Solar panels aren’t noisy, for example, which is one of the problems with wind turbines. Solar panels quietly and passively create electricity. Unlike wind turbines, they don’t kill birds or mess with the echolocation systems of bats.

We can also compare solar panels to hydroelectric dams. Yes, hydroelectric power is a cheap and renewable source of energy. However, hydroelectric dams cause massive changes to the environment. A single dam can lead to permanent ecological impacts hundreds of miles upriver. It can drown entire forests and force native wildlife into new regions.

Yes, solar panels may require you to clear some canopy space in a forest, or find an open field. Aside from requiring a clear view of the sun, however, they are minimally disruptive to the environment.

The environmental benefits of solar energy don’t just help our planet and wildlife: they also help human populations as a whole.

According to an analysis by the National Renewable Energy Laboratory (NREL), widespread solar energy adoption would significantly reduce the levels of nitrous oxides, sulfur dioxide, and particulate matter emissions, all of which are linked to health problems.

Do you live in a polluted part of the world? You likely have a higher risk of respiratory problems, heart problems, and other health issues.

The NREL’s report found that, among other benefits, solar panel usage can lead to fewer cases of chronic bronchitis, respiratory and cardiovascular problems, and lost workdays linked to health issues.

An analysis by an organization called the Union of Concerned Scientists (UCS) found that renewable energy could produce 202,000 new jobs in the United States by 2025 – three times as many jobs as would be produced by fossil fuel production in that same time period.

Here’s one final environmental impact of clean, solar energy: we can enjoy stable energy prices. Up above, we mentioned how organizations like OPEC can destabilize the world economy because they have enormous control over global energy production.

By investing in renewable sources like solar energy, countries can create energy independence. They can enjoy stable energy prices from a fixed source of electricity. We don’t have to be subject to price fluctuations in global energy markets, or changes in the price of natural resources.

With enough solar energy production, it’s impossible for another country to affect your economy. What’s a hostile country going to do – block out the sun?

What are the environmental benefits of solar energy? Solar energy is a renewable source of energy that’s proven to be efficient, affordable, and reliable. It’s also accessible all over the world. It emits virtually no greenhouse gas (GHG) compared to traditional energy sources. And, unlike hydroelectric power and wind power, it provides minimal disturbance to the surrounding environment.

For all of these reasons, solar energy is one of our best available sources of energy in terms of its environmental benefits.