What Is Solar Energy?

Photovoltaic cells, or PV cells, are made from materials that exhibit a photovoltaic effect. That means when the sun hits these materials, the photons from the sunlight excite the electrons in the cell, causing them to flow and generate electricity. The word “photovoltaic”, by the way, is derived from words meaning “light” and “electric”. It’s “electricity” generated by “light”.

Solar panels produce electricity whenever it’s in demand. When in use, solar energy produces no emissions. When you produce one megawatt hour of solar electricity, you’re offsetting about 0.75 to 1 tonne of CO2 that would be generated from conventional energy sources. 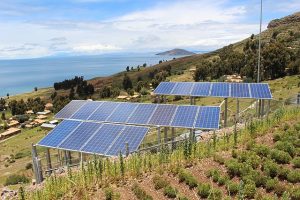 Photovoltaic panels are just one way to harness energy from the sun. PV panels let us turn the sun’s energy into electricity. However, we can capture that energy and use it for other purposes – like solar heating, solar thermal energy, solar architecture, molten salt power plants, and artificial photosynthesis.

The expanding world of solar technology has given us more ways to use solar energy than ever before. Solar energy is hitting our planet all the time. We’re never going to use “too much” solar energy, and the death of our sun is billions of years away. Solar energy lets us capture energy that was just going to be absorbed into the ground or reflected away from the earth. It’s arguably the most renewable source of energy we have on our planet.

Passive solar techniques include designing a house so that it passively captures solar energy. You might design it with large windows that capture the sun’s heat and trap it during the cold winter months, for example. Some homes are oriented towards the south to capture more solar energy throughout the year (in the northern hemisphere), which is an example of a passive solar technique.

Active solar techniques refer to technologies like solar panels and solar water heating systems that are specifically designed to harness the sun’s energy. The technology is actively working to transform the energy of the sun into something usable.

The Science of Solar Energy: Where Does It Come From?

Every day, the sun radiates energy across the universe. The earth absorbs a small portion of that energy. It’s estimated that we receive about 174 petawatts (PW) of energy at the upper atmosphere of the Earth. Approximately 30% of that energy is reflected by our atmosphere back into space. The remaining 70% is absorbed by the planet – including clouds, oceans, and land.

When solar radiation reaches our land and oceans, it heats the planet. Our sun’s radiation is the reason we live on a vibrant planet with an oxygen-rich atmosphere instead of a barren, frozen rock like Mars. Altogether, this solar energy keeps our planet at an average temperature of 14 degrees Celsius.

We’re Not the First Species to Use Solar Energy

Solar energy has been a buzzword for the last few decades. However, we’re certainly not the first species to take advantage of solar energy.

Plants are some of the earliest forms of solar energy production. Plants use a process called photosynthesis to convert solar energy into chemically stored energy. Plants use this energy to grow and reproduce.

A study by the United Nations Development Programme found that the annual potential of solar energy production eclipsed the total energy consumption of the earth.

One report from 2002 found that the sun hit the earth with more energy in one hour than the world used in one year. The amount of solar energy that reaches the surface of the planet is so enormous that in one year, it’s about twice as much energy as will ever be obtained from all non-renewable energy sources on our planet – including coal, oil, natural gas, and mined uranium.

By focusing on developing renewable, clean, efficient solar energy technologies today, we can create a cleaner, more sustainable future for our planet. That’s the power of solar energy.