To be defined as “renewable”, energy needs to come from a source that is inexhaustible. Adding wind turbines doesn’t mean we have less wind, for example. Harnessing geothermal energy doesn’t mean we prevent volcanoes from erupting. Running water through a hydroelectric dam doesn’t make the water disappear. And adding solar panels to your home doesn’t reduce the amount of energy created by the sun. 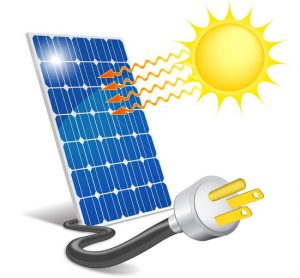 The energy from our sun is hitting our planet every day. Most of that energy is absorbed by our land and oceans. This energy is what causes our planet to stay warm and maintain an atmosphere. When we add solar panels to our planet, we’re not reducing the amount of energy that hits our planet. We’re just capturing something that’s already there and will not be depleted.

All Types of Solar Energy Are Renewable

There are also solar thermal systems, which don’t convert the sun’s energy into electricity. They convert it into heat. These systems store heat from the sun, then allow you to use that heat for a variety of purposes. We’ve seen solar water heaters, for example, and passive home heating systems.

No matter what type of solar energy we’re talking about, it’s all renewable.

Solar Energy is Clean and Non-Polluting

Of course, not all renewable energy sources are clean. Nuclear energy, for example, is one of the best sources of energy in the world today. However, there’s the problem of dealing with nuclear waste – which can be a huge environmental hazard.

Overall, however, solar energy and other renewable source are significantly cleaner than non-renewable energy sources like coal and oil. Solar energy doesn’t produce emissions (like greenhouse gases or toxic waste) in order to generate power. Fossil fuels do.

Solar energy is a renewable resource that creates energy in a clean, sustainable, non-polluting way.

Creating solar energy requires the use of solar equipment – like photovoltaic systems. These systems use non-renewable resources – like minerals and plastics. In order to make solar panels, you need to spend energy. You need to ship materials and panels around the world, generating greenhouse gases to do so.

Fortunately, the solar industry has become significantly more efficient over the years. Today, the amount of energy it takes to build a solar panel will be canceled out within 1 to 3 years of using your solar panel.

Yes, it requires energy to build solar panels. But that doesn’t take away from the fact that solar energy is a renewable resource.

The Sun Will Die in 7 Billion Years

Occasionally, you’ll find naysayers online who say that solar energy isn’t renewable because the sun will eventually die out. That may technically be true. It’s true that the sun will die out one day. But it won’t die out because of our solar panel usage.

Remember: the sun radiates energy to all corners of the universe. The earth is just a small speck in the path of that radiation. We absorb a tiny percentage of the sun’s energy. The rest gets sent to other planets in our solar system, to other galaxies, or into the void of space.

We could build enormous solar panels across every square inch of our planet. We could extend solar panels hundreds of miles into space. We could do all of these things – and it still wouldn’t have any impact on the lifespan of our sun.

Ultimately, our sun is expected to die in about 5 billion years. At that time, the sun will become a red giant so large that it will engulf our planet. That’s going to happen regardless of our use of solar energy.

So is solar energy renewable? Absolutely.