How Does Solar Energy Work?

Most of us know that solar panels convert sunlight into electricity. But few people know exactly how solar energy works.

How does solar energy work? How is it produced? Today, we’re answering all of your questions to give you a better understanding of the nature of solar energy. 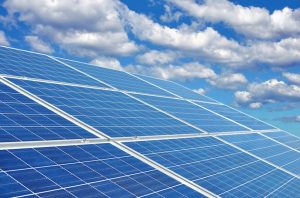 The Sun’s Energy is Hitting Our Planet Every Day

The sun radiates an enormous amount of energy every day. That energy radiates across our solar system, our galaxy, and the universe. A tiny fraction of that radiation hits our planet. This energy is absorbed by our land and oceans. It’s because of this energy that our planet is warm and has an atmosphere.

Silicon and Other Minerals Turn Solar Energy into Electricity

Copper-indium-gallium-selenide, for example, is one popular option. These are smaller, cheaper crystals that work in a similar way to silicon. This material is popular because it can be shaped into flexible “films”. That’s why it’s called “thin film” solar technology.

Despite our efforts, copper-indium-gallium-selenide is not as efficient as silicon in terms of turning light into electricity. However, technology continues to improve every year. Solar panels have never been more efficient than they are today.

How Do Solar Cells Work?

We know that certain minerals react with light to create electricity. In order to harness that property, however, we need to make solar cells. A solar cell is a manufactured device that takes the energy of sunlight and converts it into usable electricity.

How does a solar cell work?

Basically, the solar cell is made of material like silicon or the copper-indium-gallium-selenide we mentioned above. This material is found in the form of many crystals linked together.

One of the best ways to visualize this is like a bookshelf with two shelves. Before being exposed to sunlight, the crystals in your solar cell are in their normal state. Picture a ball sitting on the bottom shelf. After being exposed to sunlight, these balls bump up to the next shelf. The electrons get promoted to a higher energy level. Once they’re on this energy level, they can’t bump down to the previous level until you spend that energy.

When you’re ready to collect the energy, you take the ball and move it down to the bottom shelf. You harness the energy, then wait for photons of light to bump the ball to the second shelf once again.

After you install photovoltaic systems and they begin to generate electricity, they’ll only create direct current (DC) electricity. With DC electricity, electrons flow in one direction around a circuit. Most modern electronics, however, require alternating current (AC), where electrons are pushed and pulled.

AC was chosen for most modern power grids because it’s less expensive to transmit electricity over long distances.

Ultimately, solar energy production technology has improved enormously over the past decade. Originally, it was a costly and inefficient technology. Today, it’s quickly becoming the energy source of the future – and the technology has never been better.